How to Care for Kalanchoes 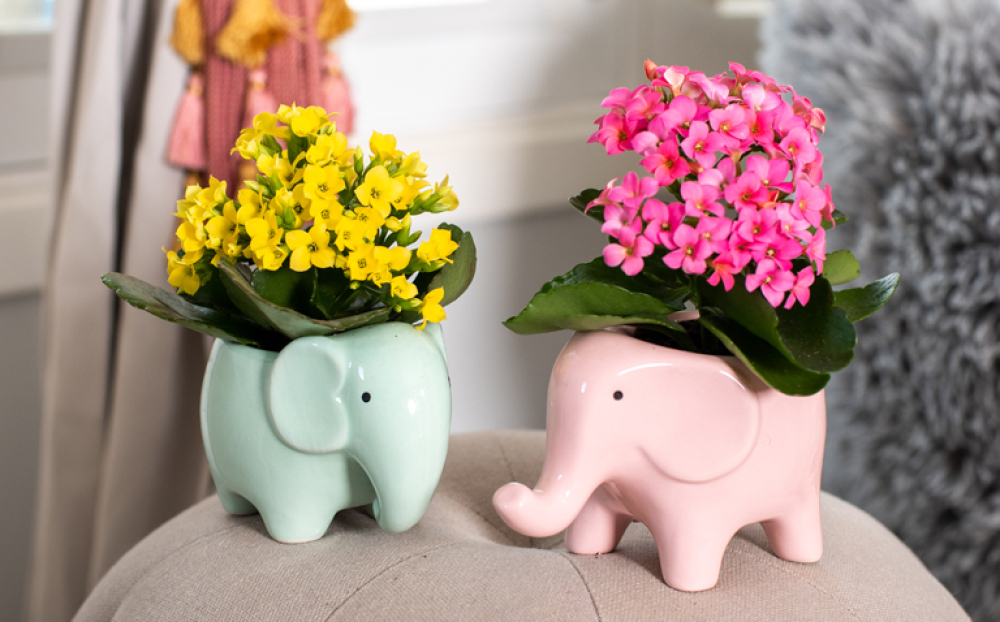 Bright and cheerful with long-lasting, abundant blooms, Kalanchoes are a favourite for their ability to brighten up any space year-round. Read on for more information about how to care for these succulent plants!

Kalanchoes are a family of flowering, succulent plants. There are over 100 varieties, but only select varieties are seen in mass production. They are hardy plants that make great gifts due to their bright colours and resilience to cold and drought. Most species of Kalanchoes are native to Madagascar and tropical regions of Africa.

The most common type of blooming kalanchoes are Kalanchoe blossfeldiana, which bloom in a rainbow of colours including white, yellow, orange, pink, purple, red, and even bicolours (like the orange and yellow Robbie Kalanchoe). The blooms of Calandiva kalanchoes have more tightly woven petals that form rosettes.

What do Kalanchoes symbolize?

The resilience of Kalanchoes gives them the symbolic meaning of persistence and eternal love. Also known as wan zi qian hong, in Chinese culture its many small bright flowers are said to bring beauty, wealth and prosperity to the home.

How long do Kalanchoe flowers last?

Kalanchoe flowers last a long time—up to 8 weeks! Once the flowers have faded and start to turn brown, they can be snipped off with a sharp, sterile knife or scissors.

By removing any dead flowers with a sharp, sterile knife or scissors—a technique called deadheading—it will encourage the Kalanchoe to produce new blooms. Kalanchoes can bloom year-round in their native habitats, but as houseplants bloom the best in late winter and spring. Getting a kalanchoe to rebloom requires a rest period for the plant, which includes lower light levels during the fall and winter.

How often should I water my Kalanchoe?

Because Kalanchoes are succulent plants, they require less frequent watering than other flowers. The top half of the soil should be allowed to dry out between waterings. Under typical conditions, this usually means watering about once every 2-3 weeks.

How much water does a Kalanchoe need?

How much water your Kalanchoe will need will depend on a few variables, such as size, season and environmental conditions like temperature and humidity. After watering, your kalanchoe’s soil should feel moist, but there should not be any excess water standing in the bottom of its container. If you are allowing the excess water to drain away, you can be more generous. However, if your kalanchoe is planted in a container that does not allow for drainage, be sure to water sparingly, allowing the top half of the soil to dry out between waterings.

How do I water my Kalanchoe?

The best method to water a Kalanchoe is by bottom-watering it like other succulents. If your kalanchoe comes in a decorative container that does not have a drainage plug or hole at the bottom, it is best to remove the plant temporarily (if possible) and water it in a sink or basin so that the excess water can drain out. Then put it back in its container. This will help prevent the roots from sitting in water for an extended period of time, which can cause root rot.
Bottom-watering kalanchoes is also recommended because it helps promote healthy root growth. You can bottom-water your kalanchoe by placing it in a sink, dish or basin that contains about an inch or so of water, and letting the plant sit and soak up water for about 5-15 minutes. Then you can return the plant to its container and put it back in a sunny place.

Kalanchoes can be mildly toxic to dogs and cats if consumed, so it’s best to display them in a location where your furry friends can’t reach them.

As succulents, Kalanchoes prefer a well-draining potting mix that contains a mixture of sand, soil and perlite, or a mixture of 60% peat moss and 40% perlite. You can make your own by mixing half-and-half potting soil and succulent/cactus mix, which may be purchased from most garden centres.

What fertilizer should I use?

How big do Kalanchoes get?

When grown indoors, Kalanchoe blossfeldiana only grows to a maximum of 1 to 2 ft tall.

Can I plant my Kalanchoe outside?

Greenhouse-grown kalanchoes like ours are typically considered indoor plants. Kalanchoe plants prefer bright light and can tolerate some cool temperatures down to 55ºF, but will not come back after freezing. Their preferred temperature range is 18-25ºC (64-77ºF). They can be kept outside during the summer as long as the temperature is warm enough and their other care needs are met. If putting your kalanchoe outside, you should acclimate it first by gradually exposing it to increasing levels of sunlight over a period of weeks. Be aware that the shade outside during the summer is often brighter than the sunniest windowsill in your home.